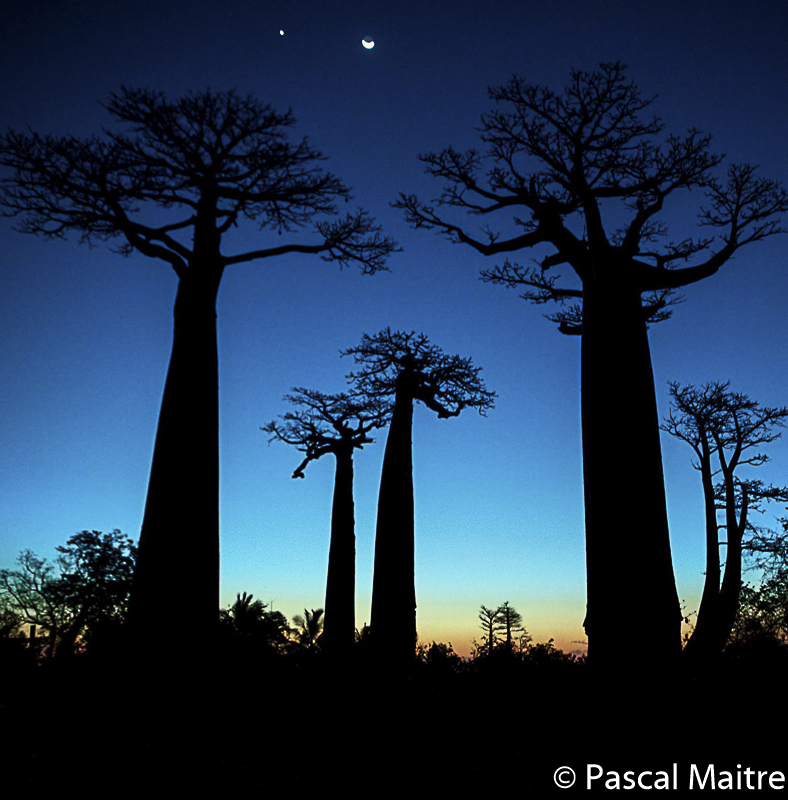 Due to a lucky coincidence I have some spare time before I have my next appointment in Vienna. In search for a new baobab story I land in front of the impressive building of the Natural History Museum (NHM). There, the exhibition “Baobab – the Magic Tree” takes place until June 3rd, 2018. More than 40 of Pascal Maître’s baobab photographs are on show. The nature photographer took over 27 trips to Madagascar to get images of the most unusual trees on the island. 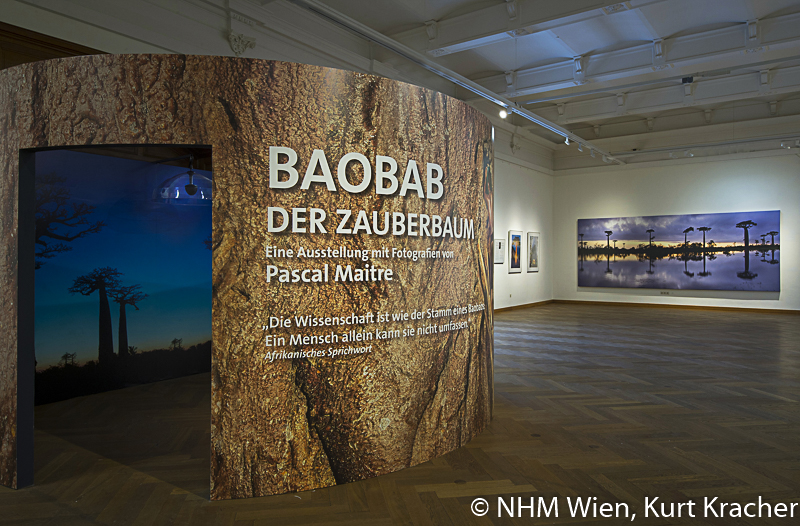 A glimpse at the exhibition, baobab photography of Pascal Maître at NHM, Vienna

Before I get to enjoy the beauty of the trees in the photographs I have to work my way up the lavishly decorated staircases to the top floor. My effort pays off as a fantastic exhibition space opens up in front of me. Immediately, an almost wall-filling, atmospheric landscape shot with baobabs in the sunset attracts my attention. I am drawn to the picture and marvel at it for several minutes. The vibrancy of the photograph impresses me. A yearning to see the giants softly makes itself known to me – I’d love to travel there right now. Madagascar has been top of my travel bucket list for a long time. 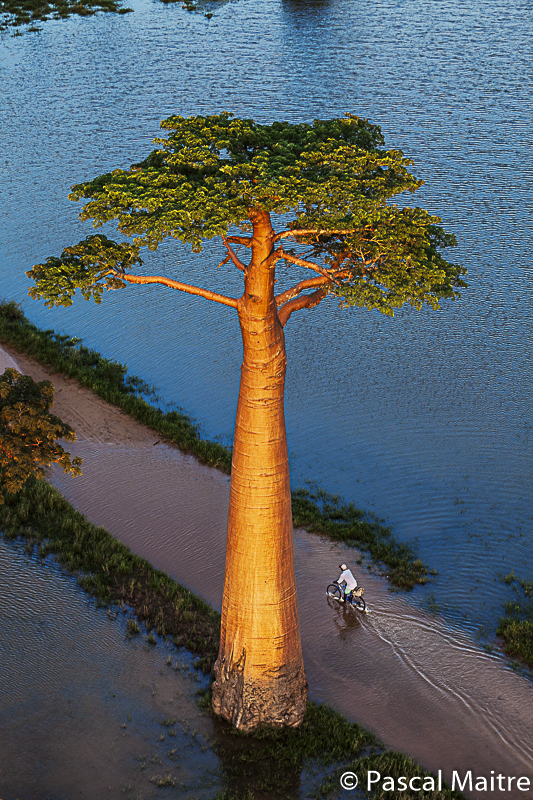 The country is particularly rich in baobabs, with seven of the eight species growing there. Six are endemic to the island and grow nowhere else in the world. With his photographic skills Maître has put them brilliantly into the limelight. The variety of perspectives is amazing. I get an idea of the dimensions of the trees, which grow up to 30 meters high and up to eleven meters thick.

Some pictures show the trees from the worm’s eye view, others from above. There is no being at eye-level with the trees since they are simply too huge – even if one of the giants lies on the ground. Although I have never been there, I get a good impression of the habitat of the trees. 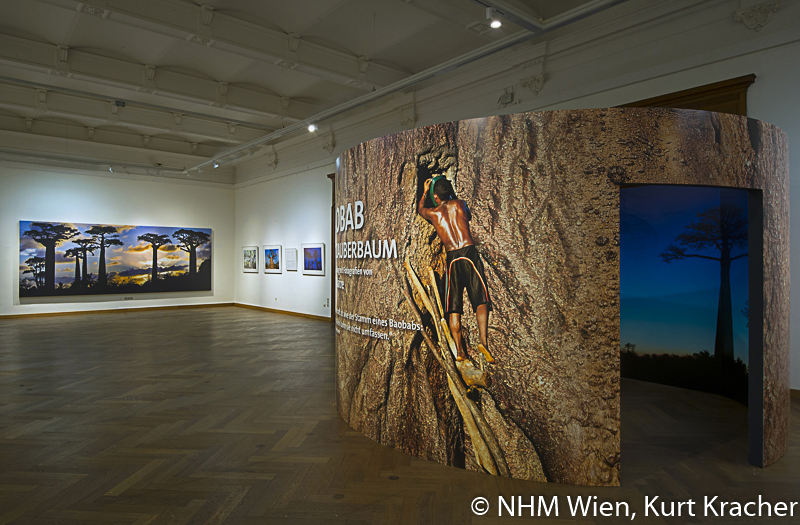 Opposite to the entrance of the exhibition right in the middle of the room is a walk-in baobab construction which invites me to get some rest. It is a model of a baobab trunk with a diameter of four meters. Compared to the diameters of old living specimens it seems almost cramped. I press the button which activates a tape that informs me of all I’d like to know of baobabs.

The tree of life

Malagasy people do not only use the bark as all parts of the trees are useful. The fruit powder is very popular. It contains many valuable ingredients and is meanwhile traded as a superfruit worldwide. The leaves are used as a spinach, the roots provide a red dye. From the seeds people press the valuable baobab oil and the bark serves as a raw material for rope making. The tree deserves to be called the “tree of life”. 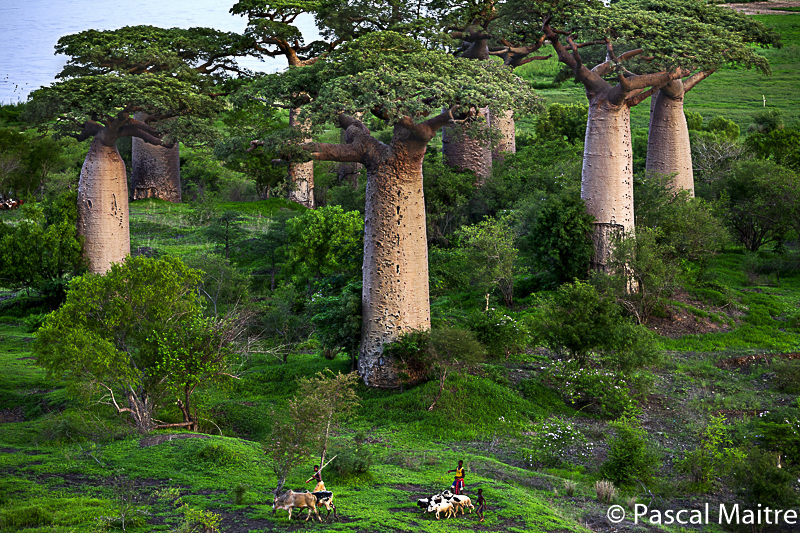 As of today, it is an important ingredient in traditional medicine. Science has proven that the leaves of Adansonia digitata, the most abundant species, contain antiviral agents. Baobab fruit powder helps to lower fever and supports the belly in its work. The oil soothes eczema, atopic dermatitis and other skin disorders. 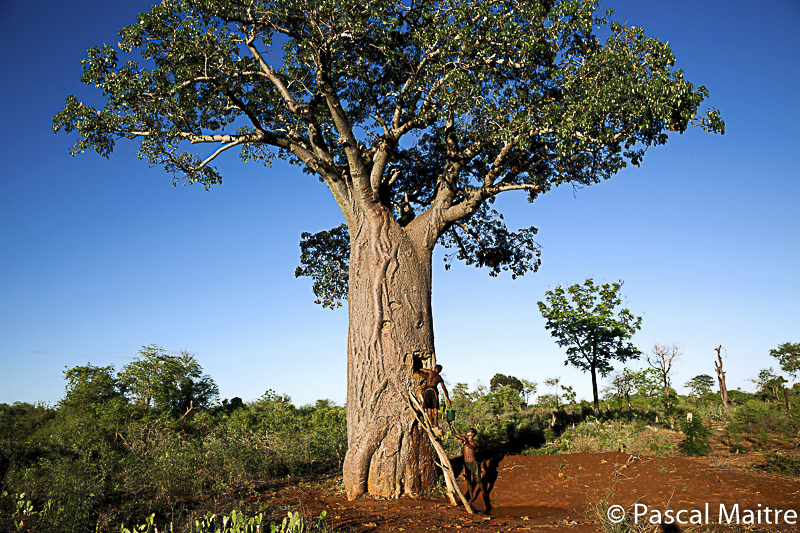 Baobabs can grow to a considerable old age. Specimens in South Africa have been carbon-dated and proven to be more than 1,000 years old. The oldest tree was 1,800 years old and grew in Limpopo Province. However, part of the giant rotted from the inside and collapsed in 2017. 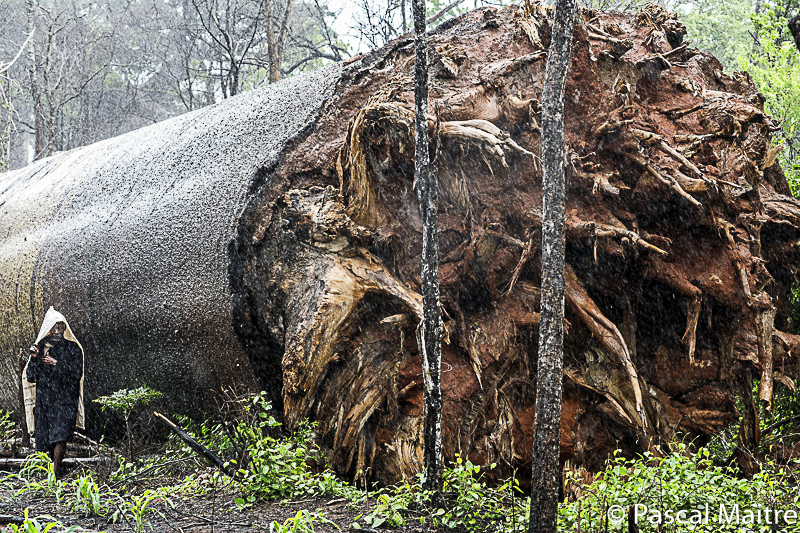 The oldest baobab on Madagascar was named “old grandmother” because of its numerous furrows and wrinkles on the trunk. Very old trees have the tendency to hollow out from the inside. The caves and hollows serve as housing, stables for livestock or deposits for supplies. The natural cavities collect rain. They are a valuable water source during dry seasons. The giants store large amounts of water in their trunk, roots and branches which allows them to survive dry phases. Baobabs are little ecosystems that provide food, water and shelter for many creatures.

The baobab – a sacred tree

Even today, baobabs are sacred to many Malagasy people. Numerous stories and myths surround them. The Malagasy counterpart to the biblical Adam for example is said to have shaped his “Eve” – how else – from a baobab. Legend has it that the creator god Zanahary, loved the baobab tree. He gave it the best place in the rainforest. But the baobab could not stand the moisture and started to nag. The god lost patience and tore the tree out of the ground completely and tossed it away as far as he could. The baobab landed on the ground with the branches first. To this day, it stretches its wide root system into the sky and its nagging has no longer been heard. A nice explanation of the sometimes bizarre appearance of the trees.

The Baobab is also known as a meeting and market place in villages. People negotiate under the tree and consult each other. Particularly the old trees serve as popular and clearly visible meeting points and signposts.

On an information board in the exhibition, I read how Maître spent a magical night in a baobab to witness the impressive flowering of the giants. From his experience he says: “That night I slept high up in that tree, between heaven and earth. When I woke up, I found myself among thousands of stars and opening flowers. An unforgettable experience.” 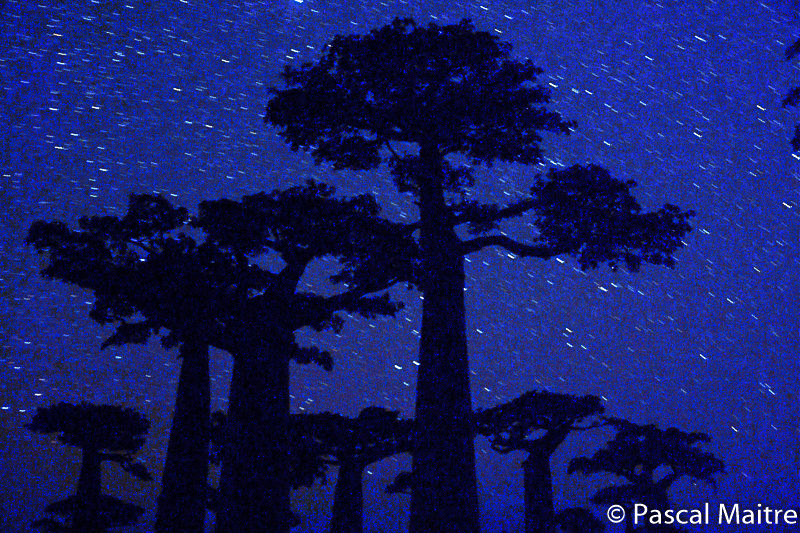 I have not spent a night in the treetop of a baobab to experience the wonder of an opening flower. For me, a comfortable camping chair right under a huge tree that was full of buds in South Africa did the job just fine. The flower buds open late in the afternoon or evening depending on their location. The silent spectacle lasts only for a single night. By the next morning the flowers begin to wither, later in the morning they fall off to the delight of cattle and goats which consider that a delicacy.

After the second round in the exhibition at the latest I fell for the magic of the Malagasy Baobabs. I dream of visiting the icons in their natural environment. Unfortunately, six of the seven species in Madagascar are endangered. Their habitats are dwindling drastically. Among other things, this is due to growing population and the hunger for agricultural land. The space for these majestic trees diminishes on a daily basis.